The Fellowship Room, built in 1973 and opened on 11th May 1974 was the result of a problem in painting the old central heating oil storage tank.

The tank was sited in part of some disused outdoor toilets built onto the rear of the Church.  It became clear that the tank was badly in need of painting but access to all four sides was impossible because of its location.  The solution was to demolish the old toilets but as this was being discussed the idea of building across the gap between the back of the Church and the old wooden Meeting Room, perhaps using the reclaimed bricks from the toilets was suggested.   This seemed a good idea but then an even bigger vision emerged.  Why not build a larger building to replace the old wooden hut, with access into it from the Church.

The following account is taken from the brochure which was produced for the opening celebrations.

"It was not long before the idea of access into the Church from this room was mentioned, and with it the idea of moving the pulpit forward to effect this access; authorisation from the Trust was soon obtained.

Those who have taken part in the project from the beginning have vivid memories of the appearance of loads of second-hand bricks, and the sound of the hammers and chisels, tap, tap, tapping away for days, yes, and for weeks on end, as volunteers set about the cleaning of the bricks.

But before one can build one needs Plans, and an architect and it is a sad part of the story that we come to now.  The gladness of our celebration cannot help but be tinged with sadness at the thought of our dear friend Dick Owen, who passed away after a relatively short illness, not long before the project was completed.  Dick, a lovable friend to many of us, was our architect; he drew many Plans until agreement on design was obtained, he saw to planning permission being obtained from the Local Authority.  More than his Planning, he personally moved the pulpit to its new position, and delighted us with his joinery.  He was a real craftsman.  He gave up many days of his normal leave from work to spend, often on his own, doing all kinds of jobs which no one else could have done, or could have done so well.

In one sense this new room is a memorial to Dick, for it was a remark made by him regarding the happy fellowship which had been a feature amongst the workers on the project, which caused him to say one day, "We could call it the New Fellowship Room"; and so it is.

Few, I am sure, really know all the hard work which has gone into the building of the new room. Hours were spent on preparing the site.  Deep drains had to be laid and the men of Widnes Sunday School Party almost undid half of this when they flushed the toilets before the cement had hardened around the pipes.  The access door to the Church resulted in the need for an adjacent outside buttress to the Church wall; this job was undertaken by Ken Berry.

Materials of one kind or another came from all over the place.  Bricks from the Docks at Preston (Lancashire Tar Distillers),  Railway Balast which had been delivered for us to the railway sidings at Lostock Hall,  Girders from Skeffington Mill in Preston, Roof joists from British Rail, Steel lintels for the window openings from Blackburn Railway Station, and the very floor, Canadian 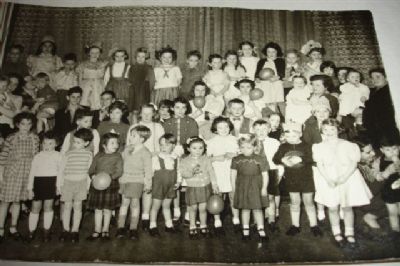 maple, was formerly the floor of St. Paul's School, in Preston.  What a lot of preparation has been needed to get such materials ready for incorporation into the building!

The writer of these few remarks feels that it would not be possible to list all those who have taken part in the project, but certainly this record would not be complete without mention of some.

After Dick Owen, surely the thanks of the Members is due to such as Joe and Kenneth Berry for enthusiasm and work 'beyond the call of duty', and Len Dunderdale and Joe Almond deserve to be mentioned too, being exceptionally faithful in their efforts.

But the names of Clifford Cotton (who did such magnificent work, levelling the floor supports; John North, Wah Good, Gordon Little, Idris Williams, Vic Crump, Fred Leigh, and others, ought to be recorded, and, I am sure that the men would agree, the name of the 'tea lady' who supported and sustained the, almost daily for months, with tea and cakes and biscuits - Brenda Leigh.  Truly a great team gave loyal service in the building of this new Fellowship Room.

But buildings are not erected without money, and even when account is taken of all the voluntary labour which has gone into the project, a lot of money has had to be found by the Church as a whole.  No direct appeal in relation to the new room has needed to be made, yet the building will be opened free of debt.  there has been much generous giving by members of the Church and the ladies have organised many events which have brought in considerable sums, and the very helpful response of the Circuit through the Circuit Advance Fund, and of the General Property Committee in Manchester, means that the whole of the money needed to finance the project will have been raised.

The flat roof was laid with roofing felt and hot pitch, by our own men, with a tar boiler and calor gas cylinder perched high on a scaffolding tower.  Occasionally, small quantities of pitch could be found melting in a large galvanised bucket on the gas cooker in the kitchen.  It is certain that, had we been constrained by current health and safety requirements and risk assessments, the project would never have been undertaken but all those involved readily agreed to work at their own risk and thankfully, during the entire time when work was in progress no injuries were sustained other than minor grazes and bruises.

The wooden folding screen which now divides the Fellowship Room was taken from  the rear of the Church where it had served to create a Ministers Vestry and a Choir Vestry.